So, I was watching Amagami SS. 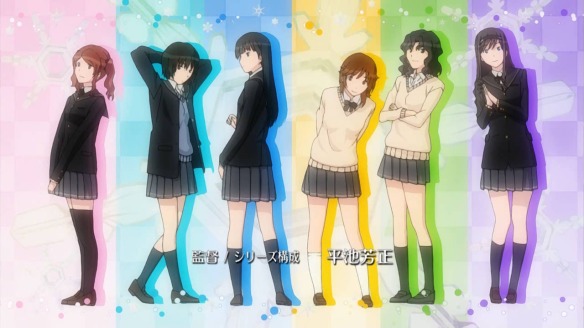 It’s cute, low-key entertainment that is obviously based on a dating sim.  It follows a 100% nondescript, inoffensive and typical protagonist (I think they come in ten-packs at Costco), and his adventures with six (I know, he’s got a lot of options for a nothing-man) lovely ladies.  You know, standard dating sim fare.

Though I do like this show.  I am enjoying getting to know each of the girls and the burgeoning feelings.  It’s kinda the feeling of cloud watching on a warm summer day.  I think the presentation of their characters in interesting and that they feel well rounded and pleasantly more like real people than most dating sim characters (which are so often SO HEAVILY trope-based).

So, it exactly the kind of show the one Michelin star statement “Very good in it’s category” is meant to describe. So I’d recommend it.

But then I got to thinking.  It’s nice to get to know the girls, it’s nice that they have decently developed characters and aren’t just flat wank-fodder.  It’s nice to see female characters portrayed like people, with worries and hardships.  But the protagonist barely has any characterization.  His flat, uninterestingness might work well for a game, but it makes me totally uninterested in him. He has a single, count it, ONE sentence of characterization, and that’s his “I got stood up once” backstory.

Compare this to Yosuga na Sora, where I was very interested in the inner world, the life and times of Mr. Protagonist. Why bother even being from the male POV if he’s going to be the lukewarm addition. Wouldn’t the story be much better if it was just about the female characters? From their POV?  With it centered in his POV, it kinda gets so much of the offensiveness of dating sims, where it’s just men manipulating women for sex. When there is good characterization, does that somehow negate the IMMENSE objectification that sexualizing them, fanservice, and the whole genre in general regularly engage in?

I don’t know, and this show got me to thinking about that.  Because as a rule, objectification pisses me off and is a big check minus against a series.  I can only tolerate so much before it is only contributing to societal problems with sexual hostility towards women and other issues I take a firm stance against.  But this show, being a good one, does a better job at not doing those things.  But by the sheer “belonging to this genre” is it irredeemable? I’m not sure, but I’m glad it got me to thinking.

BUT OMG, I WANT YOU TO SORT THINGS BY RATINGS OR CATEGORIES FOR ME! WHERE IS YOUR CONVENIENT LIST OF THOSE KINDS OF TAGS? OH, IT'S RIGHT HERE.